Book review: Against The Grain by Jay Hogan 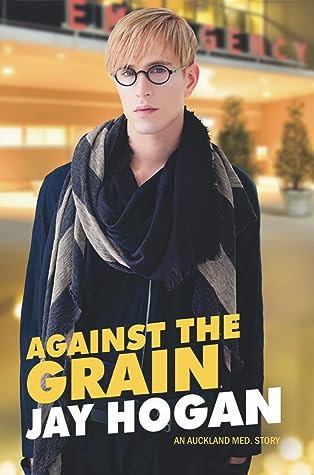 This is the fourth book in the Auckland Med series.  You can read it as a stand-alone, but you’ll enjoy it more if you read it as part of the series.

This book has some strong similarities to the second book, Crossing The Touchline.  Miller used to be a Blues rugby player and an All Black wannabe, same as Rueben is in Crossing The Touchline.  However, Miller was in a car accident and now primarily uses a wheelchair to get around.  He plays for the Wheel Blacks, the national wheelchair rugby team, and also the Auckland team.  Although I was aware that wheelchair rugby was a thing, I was unfamiliar with the sport prior to reading this book.  However, the author does an excellent job of teaching the reader about the sport, and getting across how intense, fierce and physical it is.  It helps that Sandy, who works for Ed (from the previous book) is also new to the game, so the new knowledge is shown to the reader that way rather than by info-dumping (which is appreciated!).

I found Miller, who has spent his entire life prior to this book in the closet (much the same as Rueben in the second book) a little frustrating.  I understand that he is out of touch with the politics and such of the rainbow community, despite being a member – sadly, that made a lot of sense, and I’m sure there are people in real life in exactly the same position through choice or circumstance.  However, I felt that at time he leaned too much on this excuse.  He informed Sandy at the beginning of their relationship that he was new to relationships and new to the gay scene and was bound to make mistakes, and then I felt like that was a ready-made ‘get out of jail free’ card for him to play.  Every time he stuffed up, he was all ‘Well I told you I’d be bad at this and make mistakes!’  Well, yes, but you still have to own them.  You still have to make amends.  You still have learn and improve and try harder.  Which he did, but I found it a little frustrating.

I thought the whole situation with Geo, a young man who comes to stay with Miller to escape his homophobic father, helped enormously with seeing the best in Miller.  Sandy was easy to love, with his sassy vulnerability.

Sandy’s eyebrows shot up so fast, Tony would surely find them waggling atop his espresso machine the next morning and Sandy would be condemned to drawing them in place for the remainder of his life like some Jean Harlow wannabe on a bad day.

My favourite scene was definitely when their friends and family rallied around Sandy at the hospital.  I could picture that so clearly, including the Maori colleague starting a waiata.  I found myself picturing the scene from New Zealand parliament when same-sex marriage was legalised, and I wondered if the author was inspired by that moment.  That was the song I heard in my head as I read, anyway – Pokarekare Ana.