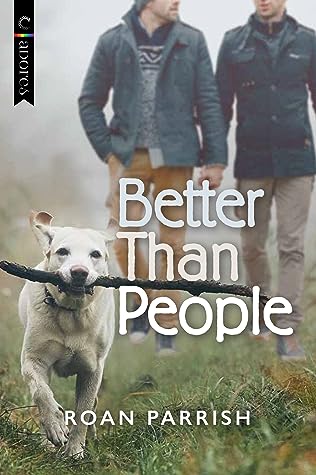 This was a sweet book.  Jack is an artist, who found himself illustrating children’s books for a living.  He has lost his faith in his own art and hasn’t drawn anything in eight months.  At the beginning of the book, he’s walking his multitude of rescued dogs and breaks his leg.

Simon suffers from severe social anxiety.  Like, crippling.  He can’t have a pet because he lives with his grandmother who is allergic, so he connects with Jack via an app and offers to walk Jack’s dogs.

There’s not a lot of conflict in this story, and any conflict present is primarily as a result of Jack not understanding Simon’s social anxiety and Simon being unwilling to test the boundaries of what he can cope with in terms of social interaction.

Simon’s grandmother Jean (and especially Jack’s response to her) was super sweet (and feisty!) and I loved her as a secondary character.  I really loved how Jack (who had been orphaned as a teenager and never knew his grandparents) thought that cookies baked by a grandmother must be utterly more special than any other kind of cookie.  So cute.

The animals (four dogs and three cats) all worked well as secondary characters too, with hilarious personalities and foibles all of their own.  I can’t even begin to choose my favourite.  Pirate?  Bernard?  Puddles?  They were all awesome.

I would have liked to have seen more of Charlie, Jack’s brother.  As the man who raised Jack from the age of 13, I felt that he had a bigger role to play.  And the author did a great job of suggesting that Charlie wished he was more present too.  He desperately wanted Jack to be happy, obviously felt guilt over not being the best dad he could be because he was only 17 when he took on the role, and it seemed obvious that he craved more time and attention from Jack.  I felt like Charlie was so sad and lonely.  I’ve already pre-ordered his book, which comes out in February.

Overall, a sweet book.  Jack was sweet, Simon was sweet and feisty, and it was a pretty definite happy ending, although I did wonder where it left Jean.  If you want a sweet holiday read (this story takes place at Christmas ultimately), you’ll enjoy this book.