I had a good weekend, all things considered.  My husband was meeting up with a bunch of his imaginary friends streamer mates on Saturday night.  One friend came to stay at our house on Friday night and we made vodka lemon lime and bitters (it’s a Kiwi/Aussie thing, Google it) and got to know each other.  Then Saturday they went to Armageddon and I worked on my family recipe book.  Saturday night we went out to meet up with the rest of their imaginary friends streamer mates. It was a bit daunting, because I didn’t know anyone, but everyone was really nice.  I played an atrocious game of pool with my husband, ate some cake that was waaaay too sweet, and met some new people who might become new friends.  We’re going to try and catch up with some for drinks and stuff one weekend.

My daughter was very kindly given two double passes to Armageddon (thanks Aero!), so on Sunday I took her and two of her friends to get their geek on.

Some of the costumes were insane! I did myself proud and asked a bunch of people to let me photograph them. It’s easier than regular street photography, because they’ve put so much effort into their outfits they’re happy to pose for photos, but I still felt proud of myself for going up to strangers and saying ‘Can I take your photo?’ 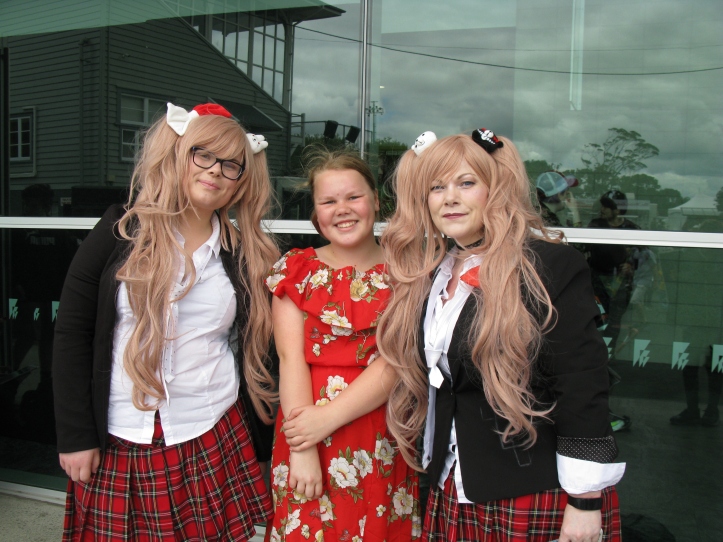 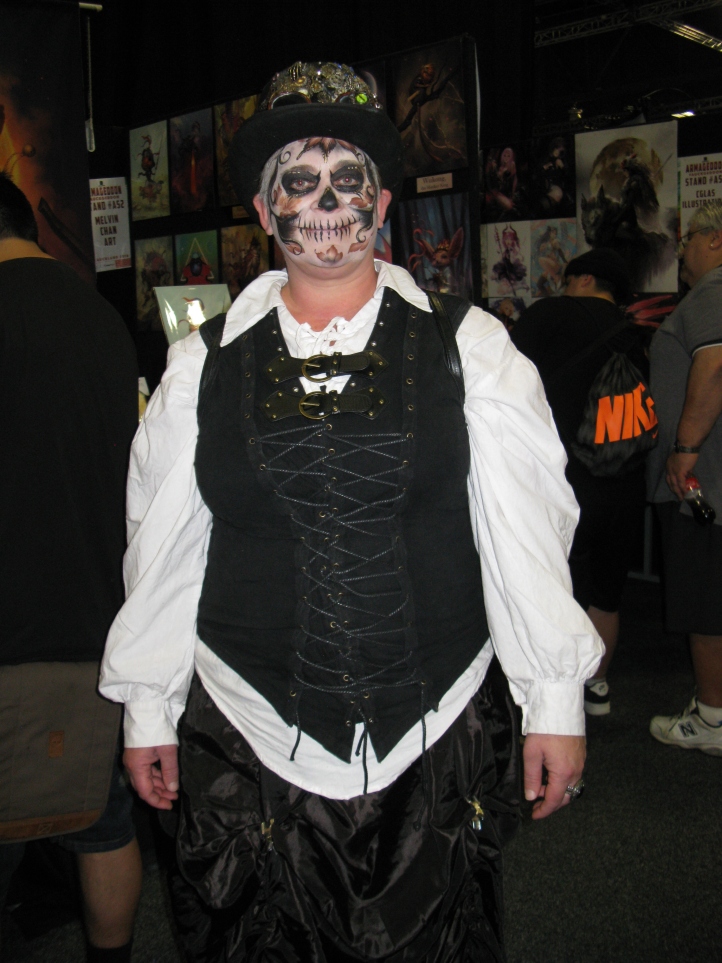 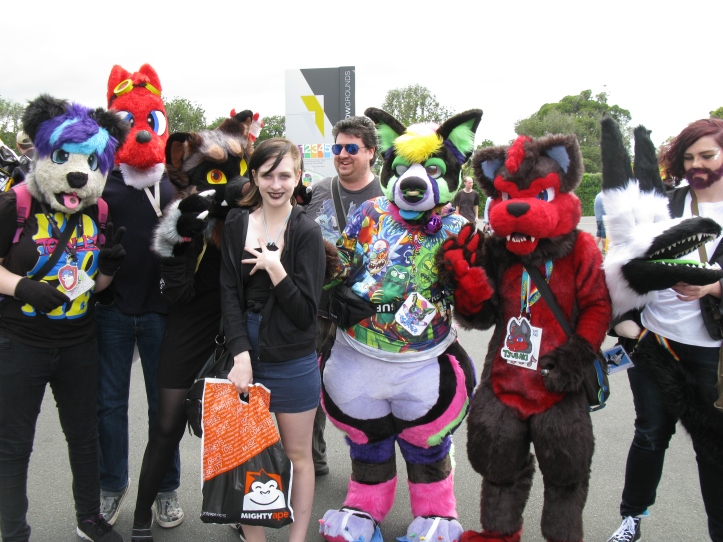 There was an author selling signed copies of his books and it was a fantasy series, so I bought the first one for my son and had it signed for him. Another Christmas present sorted.

My daughter and her friends really wanted to see the cast from RWBY, an anime series she loves. I say ‘cast’, but it’s animated, so really they’re the voice actors. She knew them all by name though. The line was insane, all the way down the corridor. We joined the queue, but it was moving ridiculously slowly. Instead of quickly signing things for each person, they were having full on conversations with each person. I think we moved up the queue at the rate of about one person per five minutes. Seriously. It was beyond ridiculous. About an hour later we were about 20 people from the front of the queue when a staff member came around and said ‘In ten minutes they’re going to take a break and come back at 3:30pm.’ Wait, that’s an hour an a half away! We’ve been waiting in line for ages and we’re so close! The line moved a little bit quicker then, just enough to give us some hope, then with about 10 people in front of us, when we were close enough to see them, the actors went for their break. Gutted. They were replaced by another group, but only one of the second group was from RWYBY and it wasn’t one that my daughter was especially interested in. Some people left and the others just went up and got autographs from the second group. We told the staff that we were waiting for the other RWBY cast to come back, but didn’t want to start all the way back at the end of the line when they came back, so after much humming and haa-ing, they found a spot for us to wait off to the side. For an HOUR and a HALF. Ugh. My back was killing me. There was a lull in the line and my daughter snuck in and got an autograph from the one RWBY guy in that group. We’d been told that autographs and photos cost money, but thankfully they were giving away small 4×6 prints with free autographs. Then, finally, the other lot came back, and we were first in line for them. All three girls got autographs, and I got some for one of their friends who hadn’t been able to come with us, so the girls were all pretty happy. But tired. So we headed home then.

When I got home, and finally sat down and rested, I remembered about the Pokemon event I was supposed to be doing. Ugh. I ended up driving just up the road to a pokestop and putting a lure on. A lure normally lasts 30 minutes but for the event it lasted 3 hours, so that was sweet. Then I put incense on and just caught shitloads of pokemon. lol

Then tonight, we went to the neighbours for a BBQ. We ended up playing a game called ‘Five Second Rule’ where you have to name 3 things in five seconds. It was hilarious. I think the most ridiculous one was when I had to ‘name three words that end in at’ and all I could name was ‘proletariat’.

The neighbour was like ‘What about cat, that, hat?’ No, I had to name proletariat.

It was so ridiculous, it had us all in hysterics. There were other funny ones too. ‘Name three reasons you’d call in sick.’ One of their boys said ‘You chopped your arm off, you killed someone’ and something else. And there were hilariously rude ones too. And a whole conversation about wanking that was quite illuminating.

The conversation always ends up in the gutter when we’re with those neighbours. It’s always hilarious. So much fun. A good night.