On Friday evening, my company got together for a social cooking ‘Asian MasterChef Challenge’ with Sachie’s Kitchen.   It was a lot of fun, and the food was delicious!

We were separated into two teams of four.  We’d chosen a Vietnamese menu, so we were making fried rice in lotus leaves, kaffir lime chicken with bok choy, and summer rolls. We watched a demonstration of all three dishes being prepared, then we had a set time limit to cook our own versions.  We were being judged on taste, presentation, one short speech from each team, and the cleanliness of our stations after we’d finished. 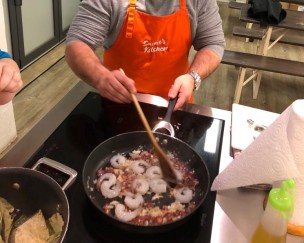 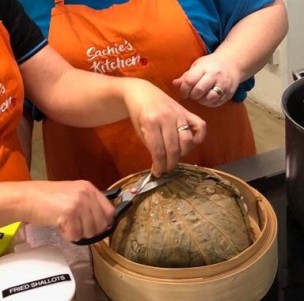 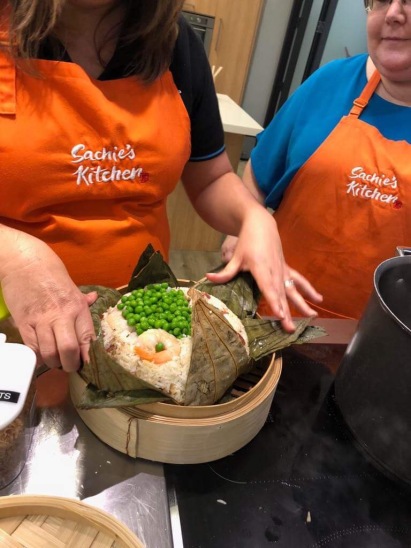 Then on to the chicken, which was seasoned with kaffir lime leaves, white pepper, tumeric, brown sugar and chillies.  When it was pretty much cooked, we added the bok choy for two minutes then seasoned with lime juice.

While the chicken was cooking, one team member was preparing the summer rolls while another prepared the dip for the summer rolls.  I can’t recall all the ingredients in the dip, but it included fish sauce, brown sugar, lime juice and chillies.  The summer rolls were stuffed with shrimps, noodles, red cabbage, lettuce, carrot, coriander, and another herb that may have been a Chinese mint or something…

Everything was pretty straight forward, but the time limit made us all rush around and panic, and laugh at ourselves, and basically added to the fun and excitement.

Our dinner looked amazing when we presented it.  We pressed the fried rice into a bowl, then upturned it onto a plate so it looked neat and tidy, then arranged two prawns on the top as the host had demonstrated.  The chicken and bok choy were placed on the side, and the summer rolls were cut in half and presented with a tiny dish of dipping sauce. 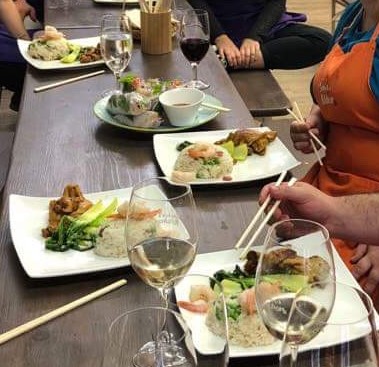 It tasted even better. The kaffir lime chicken was quite spicy, but yum. The fried rice didn’t have a lot of flavour, but worked beautifully with the chicken. The dipping sauce didn’t have the heat of the demonstration one, but tasted good with the summer rolls. I’d definitely be keen to make it again to eat at home.

We ate our fill, and no one went even a little bit hungry. We had some summer rolls left over that no one had room in their tummies for.

We won the judging on the chicken, but the other team won on their fried rice and dipping sauce. We won on the speech (which I gave) and they won on cleanliness (we had cooked cleaner, but they’d done a better clean up at the end), so overall they won. Then the hosts announced that there was another challenge, a chopstick race. We won that and took home the medals for the day. Which seemed brutally unfair considering that the other team made a better meal. I felt really bad for them.

It was a great activity for team building, I thought, and I’d love to do it again just for fun.  It’s a bit tricky with my in-laws since my father-in-law is a trained chef, my husband is a trained baker and my mother-in-law used to run a cafe, but I can see getting everyone together and having a challenge would be loads of fun.  I’ll definitely look into it.  You basically get a fun night of interactive entertainment and a delicious meal to eat as well.  Can’t go wrong with that!

I believe the colleague who organised the event is getting a copy of the recipes we used, which is awesome.  Am definitely going to make those dishes again for the family to eat one night.  I love fried rice and that chicken was amazing, so yep, definitely doing that again.

Have you ever done social cooking?  How did you find it?