Book review: In His Keeping by Maya Banks

If you’re following along with my reading challenge for 2018, this book was for ‘A book by your favourite author’.

It was hard to decide who my favourite author was.  So I went to my read books on Goodreads and reviewed all my five star books.  My top three authors were:
Maya Banks – 7
A M Arthur – 5
Nalini Singh – 5

So I went with Maya Banks, despite the fact that the last new book of hers I read was a pitiful one star disappointment, and the three before that were crappy two star reads.  Sigh.

So it was definitely with mixed feelings that I went with Maya Banks as my favourite author, but I couldn’t think of any better way to choose.

I went with the safety of re-reading one of her books that I’d enjoyed.  A safe bet, so to speak. 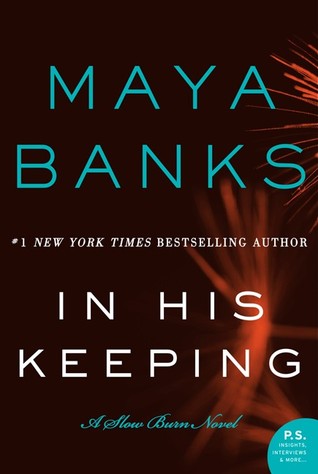 In His Keeping is the second book in the Slow Burn series.  It’s a modern paranormal romance series.  If you’re not familiar with Maya Banks, she also writes historical romance, modern military (or paramilitary) romance and menage romance.

There are five books in this series, with a sixth due to be released in March.  I rated the first one five stars, and the second and third I rated four stars.  I couldn’t finish the fourth one, and the fifth one was the one star read I’ve already mentioned.  So it started great, then seriously fizzled out.  But anyway, I enjoyed In His Keeping.

The series is based around the Devereaux family. Caleb and Beau Devereaux run a private security company.  Some of the men who work for them star in the later books.  This book, In His Keeping, is about Beau Devereaux.  A young lady comes to him for his help after her parents are kidnapped.  But she’s not an ordinary young lady.  Ari has paranormal powers.  For the most part I think she’s telekinetic.

The book moves really quickly.  I might be wrong, but I think there’s about a week from the beginning of the book to the end of the book.  Ari and Beau commit to ‘forever’ with each other by the third day I think.  It’s insta-love at its finest.  But the action is great, and the paranormal aspect keeps you wondering.  The plot kind of unfolds, revealing that it goes back to a long time before Beau and Ari were even born.

Ramie, from the first book, is the best secondary character in this book, but Zack definitely leaves us wanting to know more about him.  He’s the star of the third book, which is worth a read.

I haven’t done it justice, I don’t think, because a book is rarely as good on the second read through.  Don’t get me wrong, I enjoyed it, but I guess I was less absorbed by it than the first time.

Anyway, the first three books in this series are a decent read if you like modern paranormal romance. Maya Banks typically tortures her characters, especially the women, and this series is no different, so they’re gritty. For me, I think the speed of Beau and Ari’s relationship was the only real negative. The rest was good. And I’m tempted to re-read Zack’s story. Maybe that’ll even inspire me to finally finish the fourth book. Or not.